A soldiers story with no ending.  Azucena story is  full of ups and downs. 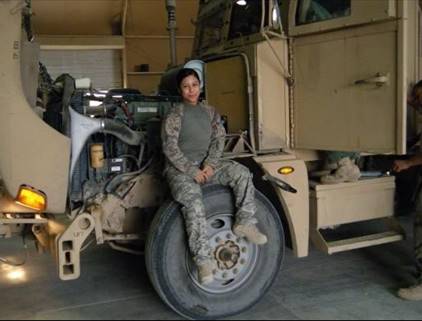 Hi, my name is Azucena Jones and I would like to tell you a story with no ending.   This story, my story, is  full of ups and downs but like I said, an ongoing story and there are many people I am grateful for it being ongoing, you see, like many other veteran’s I almost gave up on life more than once, however, In one of my darkest moments the GI Foundation helped me when so many places, even those aimed towards veterans, shut their doors on me making me feel as if I was wasting air.

When 9/11 happened I was 15, the only thought I had was “how can I help”.    A few months later an Air Force Recruiter came to my auto shop class and I knew what I wanted to do with my life.

In a blink of an eye (18 months in the DEP program to be exact) I was off to BMT at 18 years old to be a Logistics Airman, a 2T1X1 (the most deployable AFSC (MOS 88M for all you Army folks)) in the Air Force.  Years later, I completed four tours in the Middle East; Afghanistan (but first three months in UAE), Iraq, Iraq and Qatar.  Although my deployments were short; seven to eight months each, that was long enough to be witness to things I will never forget and experience things I want to forget like when someone sabotaged my Armored M915 to cover me in diesel so they could try to catch me on fire….I guess you can say that’s my most terrifying memory I have from being deployed…. but being raped three times in the dorms the first year I was in, beats that by miles.

I don’t believe many people, including veterans, know that a few of us Air Force woman were actually in combat.  I was shot at by insurgents, I was targeted with missiles, I had to learn to sleep through mortar attacks and incoming threat alarms all at the same time in which I had to guard my M915 from theft from other branches and local meaning I had to sleep either in the dirt under my truck or on steel on top of my truck while we were on the roads of Iraq.

As you can read, I didn’t have a cushion time in my career, nonetheless, I still loved being in and I wanted to serve until I retired past 20 years…That was cut short unexpectedly.  After my fourth tour I was informed I was being medically retired and it had already been approved so I couldn’t fight it.  Two months later I found myself in disbelief that I didn’t have a career anymore then my ex and I separated, I wasn’t sure what was happening in my life but I started feeling alone.  For two years, I struggled maintaining a job because of my disabilities.  I would ask for help where I could but no one could do anything “unless I was homeless or in an unstable relationship”.   My family couldn’t help, my ex would help on occasion, and the more I got in the whole with bills and finances the more medical attention I seem to need. 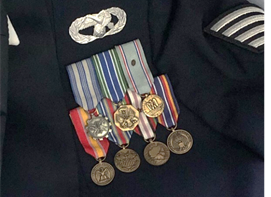 When I finally saw an opportunity to advance in life with a career I really wanted I took the leap and enrolled in school to become a Surgical Technician.  I know finances were going to be very tight but I was determined for a better life for me and my two sons.   After two months in the program without seeing my VA benefits I got suspicious of the school and started asking questions,  I got the run around a lot and false answers that made me believe I would be getting my education benefits plus back pay every week for another two months.  In this time, I contacted the state VA Rep, the VA school board along with the Dean of the school and their Rep, the outcome: I did get my benefits and back pay but a few months later, during Finals week of our first year (two year program) I was told I was not a good fit for the program and they were dropping me if I didn’t choose to drop myself.  I tried arguing my case and explaining my circumstances but three days later I was still dropped without the option of completing/passing my finals and first year.   I  could not come to grip that happen.  I was able to log in to two of my finals at home so I took them and got B’s.  I waited for days to get the call that I could join my class again and continue to my second year of the ST Program with NCI but that call never came.  I searched and hoped for another job but No one would hire me.

I spiraled into a pretty bad depression; I didn’t want to continue life.  I was in a very dark place that I could only get out of when I was around my sons.  I volunteered a lot with their schools and tried doing Lyft while they were asleep but my PTSD was getting worse, it got so bad that I was unable to have strangers inside my car by myself.  I started isolating myself but also because I couldn’t rationalize spending gas or gas.  I didn’t have much of anything so I only used my car when I absolutely needed to.  I shut out a lot of people because they didn’t understand me.  I was so tired of being told “I’m sorry but we can only help you if you are homeless” or “we aren’t accepting applications for our program at the moment.” that I wanted to give up on life again and again.

Not long after I was at my lowest, Noel and Isaac from the MVP program reached out to me concerned about my absence.  I tried playing it off saying I was okay but that night I couldn’t stand myself anymore and sent them a message.   I didn’t have any more strength so I finally broke down and cried to them.  They told me not to worry and I would hear back from them soon.  To be completely honest, I didn’t believe them and cried myself to sleep.

The next day Noel introduced me to The GI Foundation and explained their mission.  After he gave me their application I felt a little hopeful but I had already filled many applications before.  I wasn’t sure I even wanted to submit it, I didn’t think I could take another rejection.  Regardless, I was encouraged to submit it so I did.  I was ready to give up my house and have my car reprocessed when I received a letter from the GI Foundation stating they accepted and approved my request for assistance.   My heart sunk.  I couldn’t breathe.  I don’t know how long I looked at the letter.  I just couldn’t believe it; I wasn’t going to lose mine and my children’s home!   Shortly after I provided them with the documents they needed the utility companies were not shutting off their services and my mortgage company stopped calling me for my past due amount.  It was another breathe taking moment I will never forget. 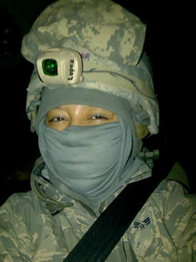 Like I mentioned in my opening this story does not have an ending, and I am happy about it.  The GI Foundation not only helped me financially, they helped me mentally.  In the application process, I had to fill out a questionnaire. In this questionnaire, I had to promise I would seek financial guidance; I had to promise I would not give up.  I had to promise I had a future and explain what I saw in this future.  The questions helped opened my eyes and made me realize I wasn’t the only one in that situation and in order for me to be able to help others in the future, I had to get better myself.   I made those promises to the GI Foundation almost a year ago, I am proud to say I have not strayed, I have stayed with my financial plan since, and it has made a positive impact on my life.

I don’t feel like a failure when I look into my sons eyes anymore.  I don’t see a broken, unwanted scared woman when I look into a mirror anymore. I’m not saying everything has been perfect but I have been more happy, outgoing, and alive since the GI Foundation helped me and I believe I’m not the only one thanking Randy Couture and his team for another chance at life.  Thank you all.